Within the short span of time since I’ve migrated in this side of the world, I’ve observed that some immigrants  who stayed here for more than 15 years tend to hold themselves with high regard and most often than not, belittle the newbies like me. 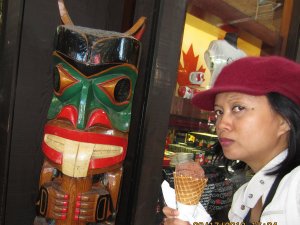 The most painful realization is, the people who do this are not strangers but they are somewhat connected to you either by blood relation or via friends. It’s a harsh… sad… reality. No pun intended.

On a happier note, my trip to Vancouver, British Columbia was very rewarding because I’ve received one of the greatest birthday gift ever! That is, meeting Kuya Boy and  Ate Cel for the first time. Ate Cel’s mother and my father are first cousins. It was my cousin Jaime (a.k.a. Chancee) who introduced me to them. And what do you know… I had a chance to meet Kuya Freddie and AJ too! Awesome!

If I cried myself to sleep during my last year’s birthday (yeah, I cried my heart out), I had a silly grin on my face this year. Thank God!

(Note: “Kuya” is a Filipino word that denotes older brother or it’s also usually used as a sign of respect for older males.
“Ate” is the equivalent term of “Kuya” for females.)

I must say, I was ecstatic when I got to know Kuya Boy and Ate Cel because they are one of the few humblest Filipino-Canadian couple I’ve ever met in this side of the world. I was over the moon because it gave me hope. And most of all, it made me realized that migrating here is not an “awful” decision after all. I guess, I was a bit traumatized on what I’ve been through. Trusting people became an extreme ordeal for me.

My late mom reiterated when I was growing up to keep my feet firmly planted on the ground whatever happens. That’s why, I get so annoyed when I see people fly inside a bubble like there’s no tomorrow and lambast people who are “below” them.  It really gets into me and at the same time, it makes me sad.

It’s good to know though, that there are still few people like Kuya Boy and Ate Cel who did not place success into their head. Indeed,  finding the chosen few made my heart burst with happiness.

Kuya Boy and Ate Cel, my heartfelt thanks for your warm hospitality, words of wisdom, and most of all, for wholeheartedly accepting me even though you have just met me . I’m super overwhelmed! See you again soon.